Meningococcal disease is an invasive infection of Neisseria meningitidis (N. meningitidis) in:

Meningococcal disease cases overwhelmingly show symptoms of meningitis (inflammation of the meninges) or septicaemia (blood poisoning). It can also present as a combination of both or as a rarer clinical presentation, such as joint infection. Meningitis can be caused by a variety of viruses or bacteria, of which N. meningitidis is one. Meningococcal disease is a significant cause of morbidity and mortality in children and young adults.

Although approximately 10% of the population are estimated to carry N. meningitidis in the nasopharynx, the vast majority do not have symptoms or develop invasive disease. Invasive cases acquire infection through inhalation of or direct contact with respiratory droplets, from either an infected person or asymptomatic carrier.

N. meningitidis is classified according to its outer membrane characteristics via a process known as serogrouping. There are a number of different serogroups, the most common of which in the UK is B followed by W. Cases of serogroup Y, Z and C disease have also been also reported.

Data and analysis of meningococcal disease is also available on the Public Health England website.

For more information on meningococcal immunisation, including updates, please refer to the PHE Green Book, Chapter 22.

The National Education for Scotland (NES) website provides healthcare professionals with training and educational materials for:

Public information can be found by visiting the NHS inform website.

In 1999 the< Meningococcal Invasive Disease Augmented Surveillance (MIDAS) system was introduced. The surveillance scheme is managed jointly by HPS and the< Scottish Haemophilus Legionella Meningococcus and Pneumococcus Reference Laboratory (external weblink) (SHLMPRL). Surveillance data is from MIDAS informs the epidemiology of meningococcal disease in Scotland.

Two cases of meningococcal disease were reported in the first quarter of 2021. This is considerably lower than the number of cases for the previous four years (range 19 to 32), as shown in Figure 1. 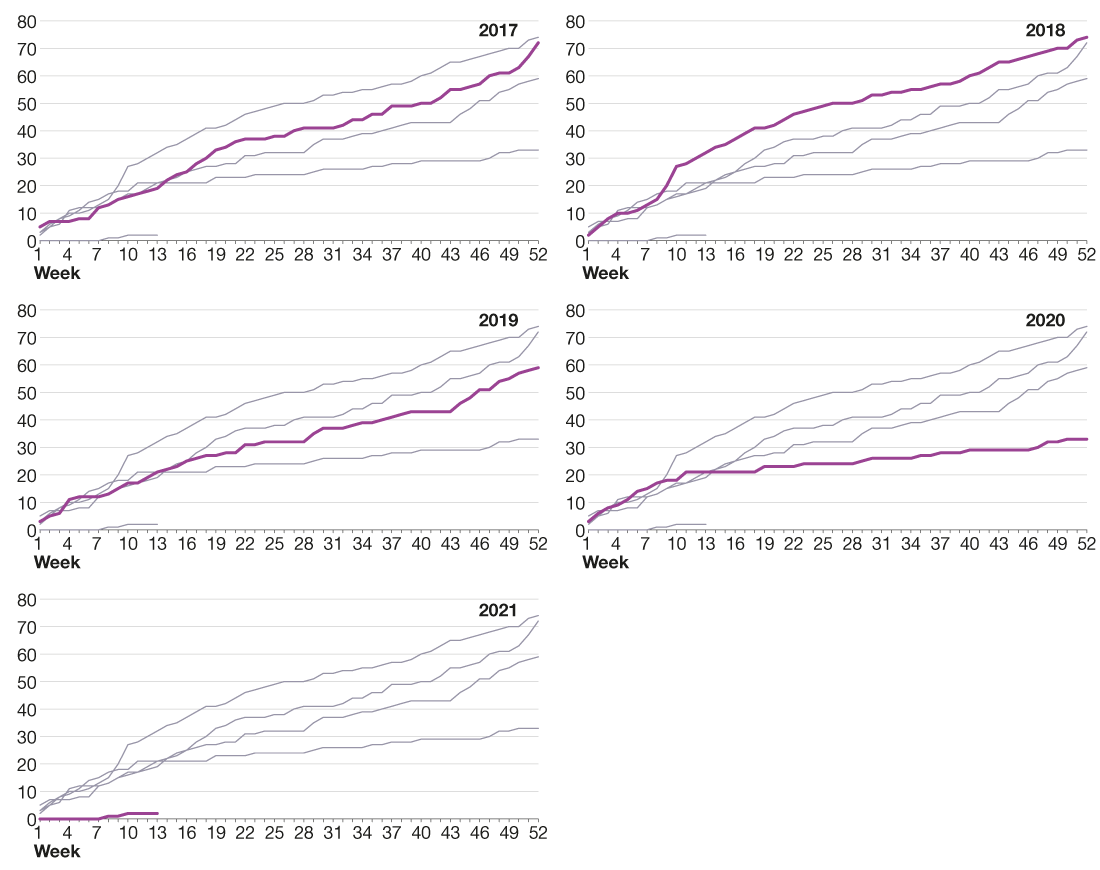 Figure 2 is a series of line graphs showing the number of meningococcal cases reported to MIDAS per quarter, by year. The data ranges from 2001 to the end of the first quarter of 2021 and each line on the graph represents number of cases for a specific age group, and there is a line for the total number of cases. Historically, cases were more frequent in the under five age group. However, since 2016 those aged above 25 years have overtaken the under fives as the group with highest number of cases overall. 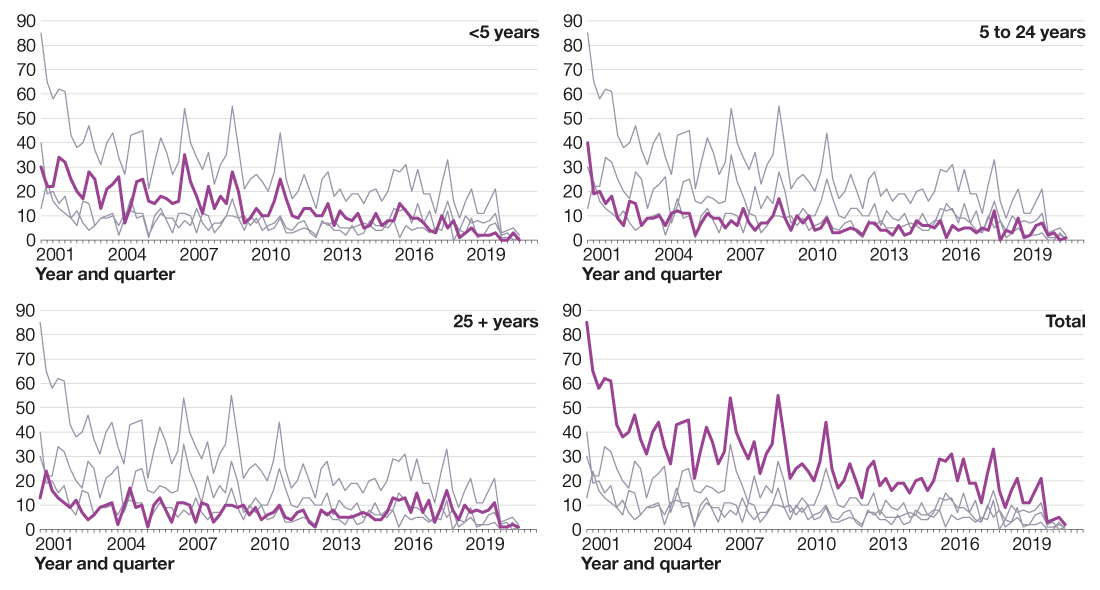 One case was serogroup B, while the other was based on clinical diagnosis, as shown in Figure 3. 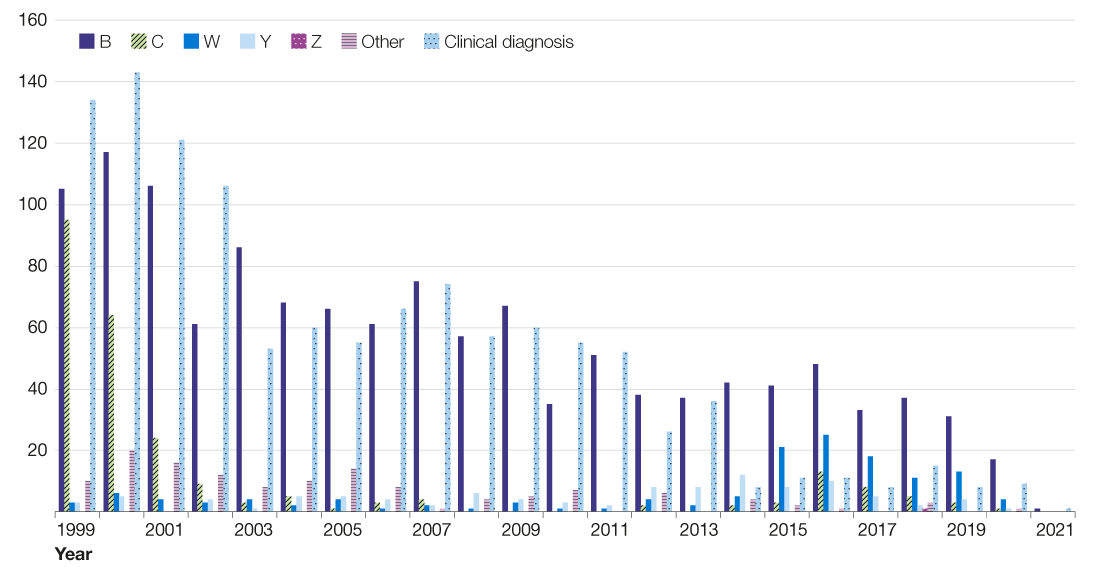 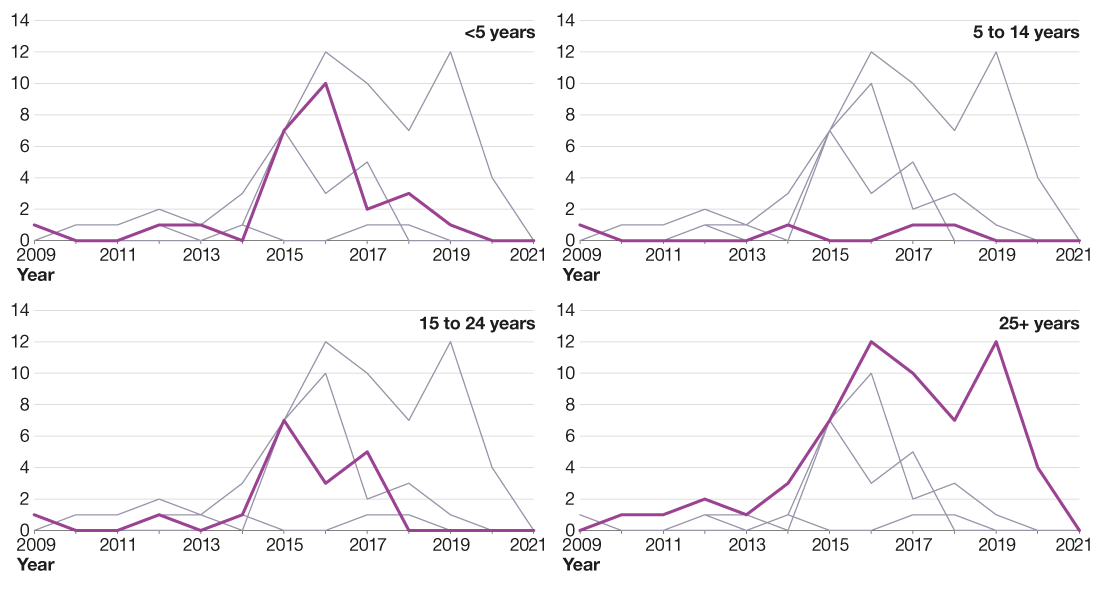 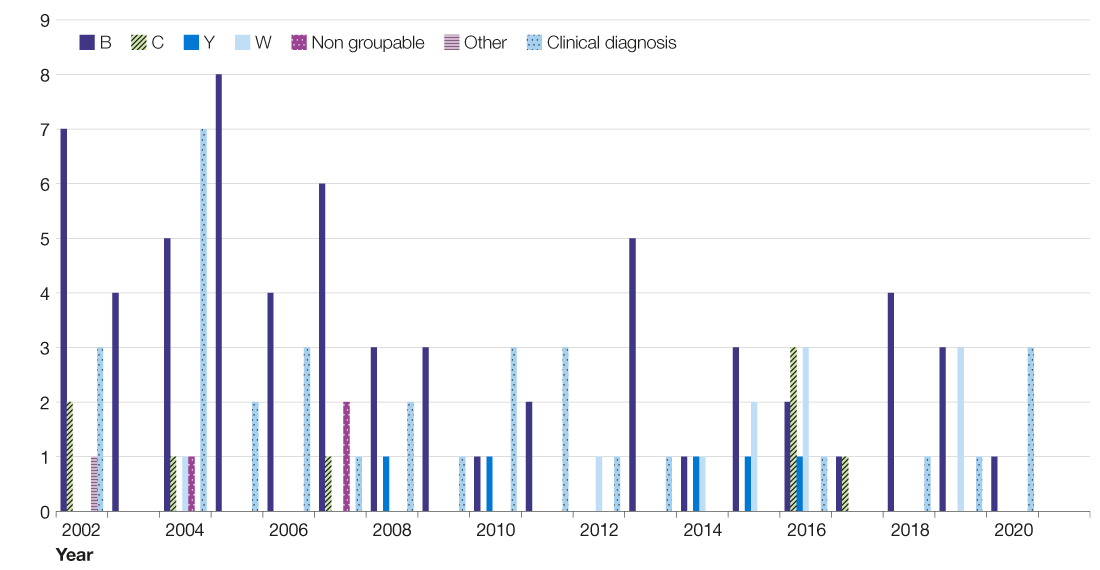 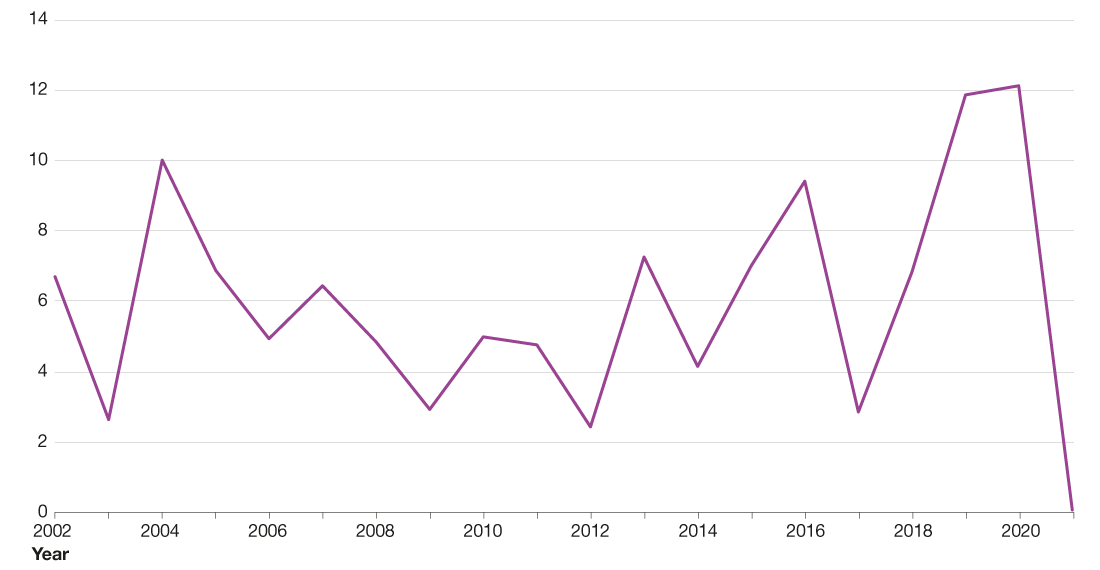 The combined Hib and MenC vaccine given in the UK is called Menitorix® and it's included in the UK childhood immunisation schedule, with routine vaccination recommended between 12 and 13 months of age. Further information about MenC vaccination is available from the NHS Inform website.

MenACWY vaccine was recommended by the Joint Committee on Vaccination and Immunisation (JCVI) and offered to 14 to 18 year olds as a measure to address an increasing number of meningococcal serogroup W cases in this age group. A phased catch-up programme also ran in Scotland between August 2015 and March 2016. The vaccine was also offered to students under the age of 25 attending university for the first time from Autumn 2015. MenACWY vaccine continues to be offered routinely to those in secondary school year 3 (S3).