Whooping cough or pertussis is an acute bacterial disease of the respiratory tract, resulting from infection with Bordetella pertussis. It can affect people of all ages but while adolescents and adults tend to suffer with a prolonged cough, unimmunised infants are at risk of severe complications and death.

Complications of whooping cough include:

Vaccination is the most effective way to prevent pertussis transmission, although protection through vaccination or from past infection isn't for life.

For further information on the transmission, symptoms and treatment of whooping cough please visit the NHS Inform website.

Guidance is available from Public Health England (PHE) for the public health management of pertussis.

The guidance has been approved for use in Scotland by the Scottish Health Protection Network Guidance Group (SHPN-GG) and should be used in conjunction with the SHPN addendum.

Download our pertussis incident form for infants under one year.

Figure 1 shows the number of positive laboratory reports of Bordetella pertussis in Scotland from 2012 to the end of March 2021. In 2012 and 2013 an outbreak of cases occurred in Scotland, with 1,896 and 1,188 laboratory reports of pertussis, respectively. Since then the number of reports annually has been lower than those years (with 533 in 2017; 443 in 2018 and 746 in 2019), although these were still elevated in comparison with pre-outbreak levels.  In 2020, there were 198 laboratory reports of Bordella pertussis, the majority of which occurred in the first quarter of the year. Numbers have since dropped notably, with only one case reported in 2021 to the end of March. This reduction is likely to be attributable to social distancing measures implemented to mitigate the transmission of COVID-19. To avoid any potential disclosure, subsequent description of cases includes only those up to 2020.

Figure 1: Number of laboratory reports of Bordetella pertussis in Scotland by month, 2012 to 2021 (week 13) 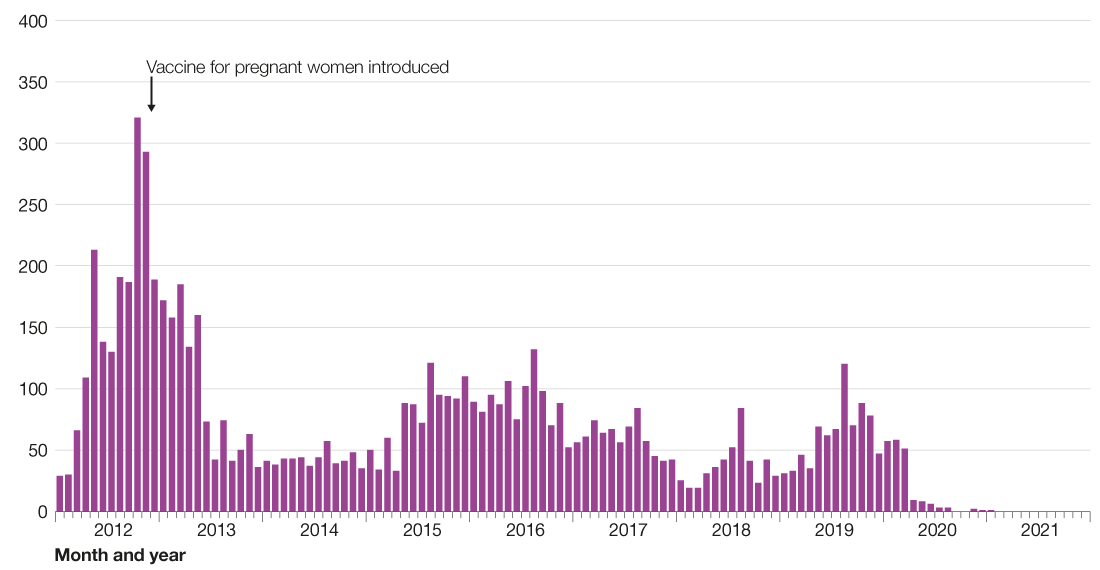 Young infants are the group most likely to develop complications from pertussis infection which can require hospital treatment and, in severe cases, can be fatal. In response to the outbreak, a pertussis vaccination programme for pregnant women was introduced in October 2012 with the aim of protecting young infants in the first few weeks of life before they are old enough to start the routine childhood vaccination programme at eight weeks.

Figure 2: Percentage of Bordetella pertussis laboratory reports in Scotland by age group and year, 2012 to 2020* 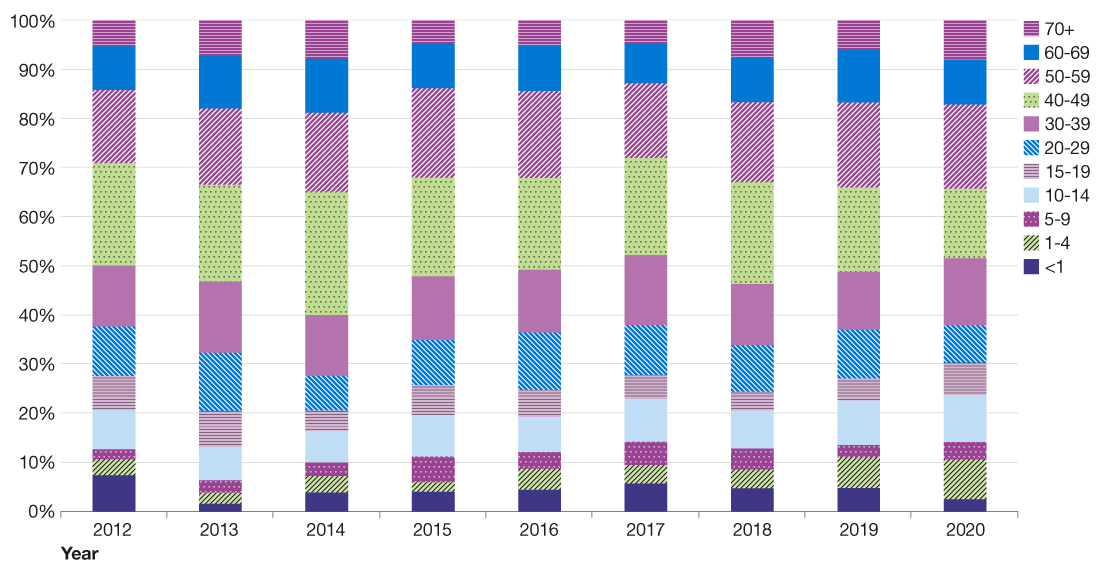 *only one case of Bordatella pertussis was been reported in the first quarter of 2021 and is therefore not included in this chart to avoid any potential identification.

Figure 3 presents the number of laboratory reports for pertussis by age group from January to December of 2020. The graph shows that the 50-59 age group accounted for the highest number of cases, however incidence was highest among children under one year of age at 9.8 per 100,000 population as shown in Figure 4. This was followed by children aged 1 to 4 years, with an incidence of 7.2 per 100,000 population.

Figure 3: Number of laboratory reports of Bordetella pertussis in Scotland by age group, 2020** 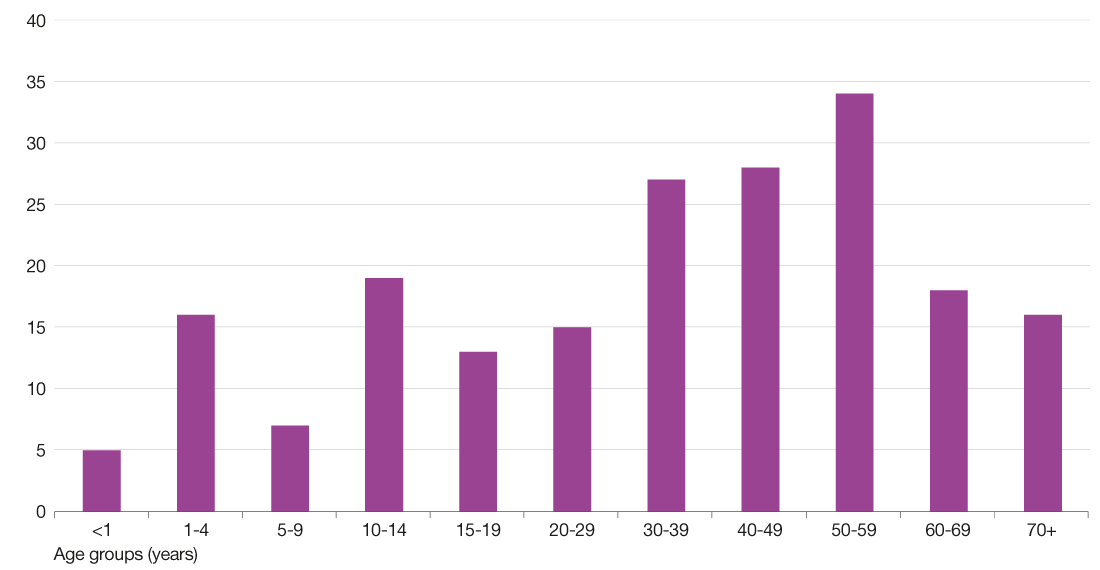 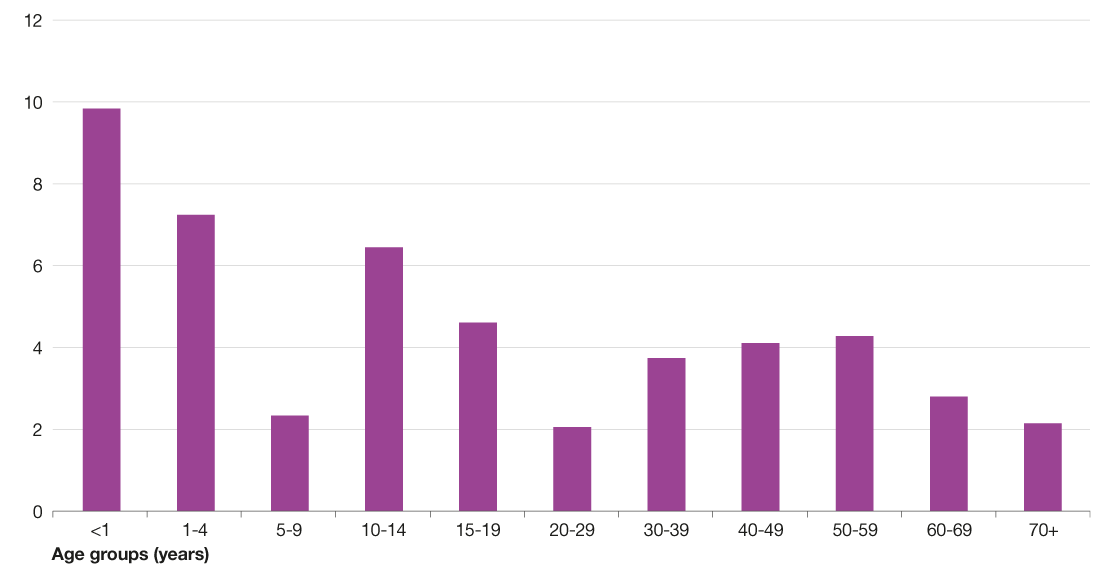 Laboratory reports by NHS board

Figure 5 shows the number of pertussis laboratory reports by NHS Board from January to December 2020, while Figure 6 presents incidence per 100,000 population. There is variation between NHS Boards, with NHS Highland reporting the highest incidence (8.1 reports per 100,000 population), followed by NHS Dumfries and Galloway (6.7 reports per 100,000). No positive laboratory reports were received in 2020 from NHS Orkney, NHS Shetland, and NHS Western Isles.

Figure 5: Number of laboratory reports of Bordetella pertussis in Scotland by NHS board, 2020** 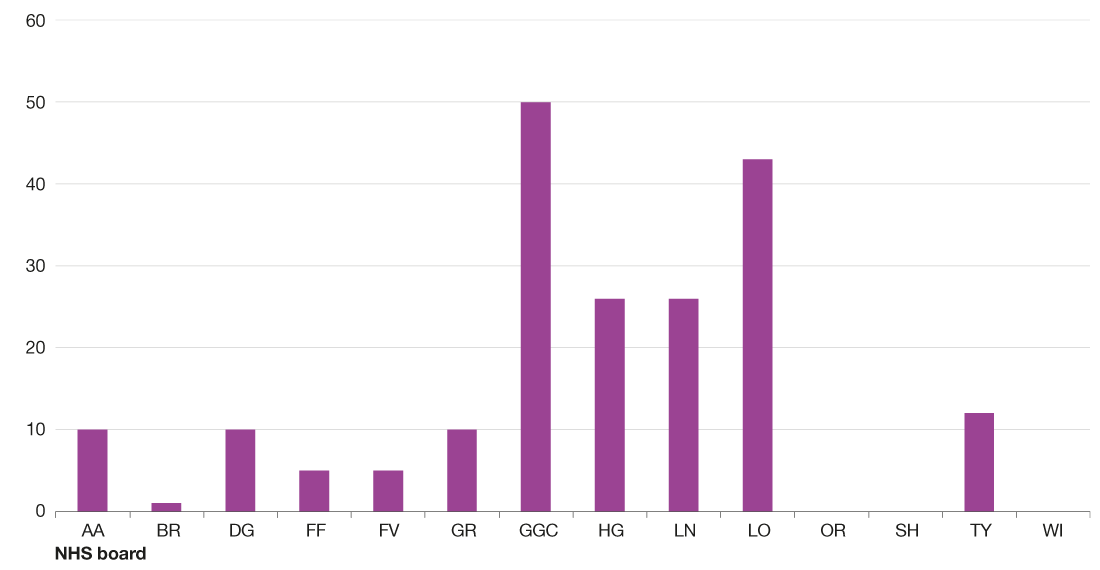 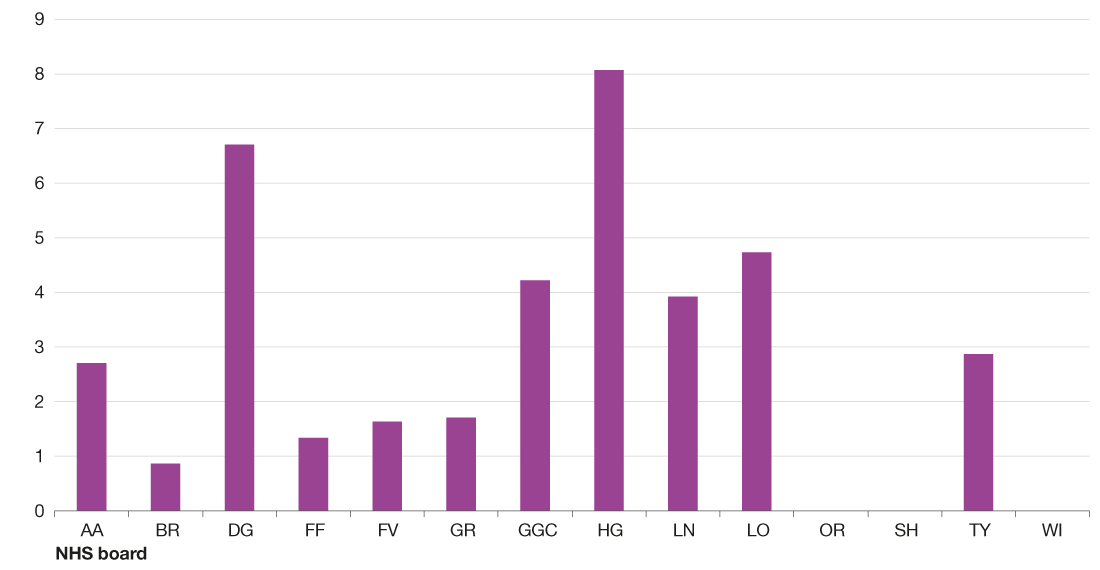 **only one case of Bordetella pertussis was reported in the first quarter of 2021 therefore 2020 data is presented.

In response to the increase in cases and to protect young infants in the first few weeks of life until starting the routine childhood immunisation programme at eight weeks, a programme was introduced in October 2012 to offer pertussis vaccination to all pregnant women.

The vaccine is offered between gestational weeks 16 and 32 to maximise protection of the baby from birth. Women may still be immunised after week 32 of pregnancy but this may not offer as high a level of passive immunological protection to the baby. Vaccination late in pregnancy may, however, directly protect the mother against disease and thereby reduce the risk of exposure to her infant.

As pertussis continues to circulate in Scotland above historical levels, immunisation of pregnant women is vital. The immunity young infants will receive from the mother, although very important in the first few weeks of life, is only short term protection. Therefore it's important that infants are vaccinated as part of the routine childhood schedule on time in order to provide longer term protection.